I Had COVID-19 But Tested Negative 5 Times. Here's What You Should Know About Testing. 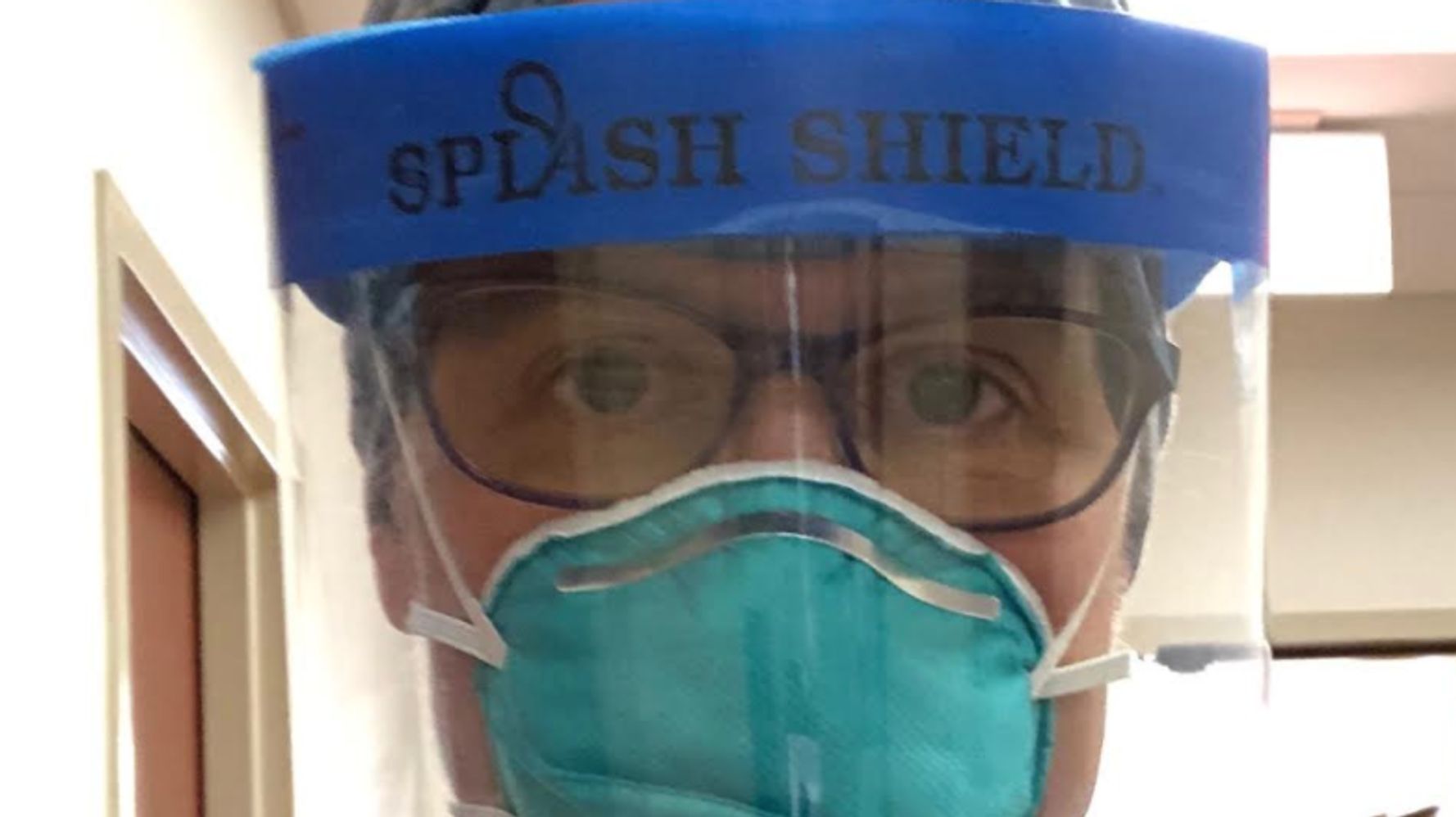 Not so long ago, if you had a mild sore throat and nasal congestion, you probably weren’t worried that something sinister was brewing inside you. Most likely you would have appropriately diagnosed yourself with a common cold, purchased some decongestants and rested. If you developed a fever, you might have had influenza, but usually, you could safely assume that what you were experiencing was a temporary inconvenience rather than a life-threatening illness. It was just another virus. Brush it off, get back to work.

But now getting sick is viewed very differently.

As an emergency physician these days, I’m often asked by friends whether they should be concerned that a symptom they’re experiencing may be due to COVID-19, or whether it’s just related to allergies or another virus. My neighbor’s daughter developed a fever with abdominal pain ― could it be COVID-19? A friend developed a headache with body aches ― did he have COVID-19? My brother felt extreme fatigue with nausea ― was it COVID-19 and should he obtain testing? What should he tell his wife? What about his kids?

Over the last few months, it has become clear that the symptoms of COVID-19 are numerous and include not only fever, cough and shortness of breath but also body aches, significant fatigue, diarrhea, nausea and loss of taste or smell. Because there are so many potential symptoms and combinations of symptoms ― and so much confusion about the disease in general ― more and more people are afraid that they might have a potentially devastating illness, and so they are seeking reassurance through medical experts and testing at earlier and earlier stages of their illness.

In mid-June, when Texas lifted stay-at-home orders and allowed businesses to reopen, the hospital where I worked quickly became much busier than it had been. It was during that time that my husband, also an emergency physician, contracted COVID-19.

I was working an overnight shift the evening that he developed a fever and fatigue and tested positive for the coronavirus. Even though I had no symptoms, because I had potentially been exposed to the virus via my husband, my hospital immediately required me to be tested as well. My test came back negative.

My husband immediately isolated himself at a hotel that was being used as a haven for infected health care providers and I was sent home. We were worried about his testing positive, that he may have transmitted the disease to me, and what might happen if either of us became very ill, but at that early stage of the disease, all we could do was wait to see what might happen.

Two days later, I was tested again using the rapid antigen assay. This test also came back negative. This was not completely surprising since I still had not developed symptoms. To more accurately verify whether I was infected, I was also tested using the PCR viral test. Unlike the rapid antigen test, this test detects actual viral RNA, but results usually are not returned quickly and mine were not going to be available for another two days.

This dual testing protocol is often initiated when there is a high suspicion that an individual has COVID-19 and the initial rapid antigen test is negative. Though I seemed fine, I was worried that I could be asymptomatic and I didn’t want to pass the disease to my 11-year-old son, whom I had to take care of by myself because my husband was isolating at the hotel.

I wanted to keep our son as safe as possible but I also knew that he still needed my love, attention and general care. So I manically cleaned surfaces around our house, wore a mask when I had to come in close contact with him and relegated him to playing video games in a room I did not enter. I knew he was healthy and, especially as a physician, I knew that the likelihood of him becoming significantly ill was low if he did contract COVID-19. I still couldn’t stop myself from fearing that he might be one of the kids who got seriously sick ― or worse ― from the disease.

The next day, I developed a minor cough and chills. I knew something was not right, but I did not have a fever and I was unimpressed with my symptoms. I obtained a fourth COVID-19 test and, once again, it came back negative.

My husband thought I might have a different virus because I had been caring for many patients with many different illnesses the prior week. Maybe it was just a cold. Maybe it was the flu. I had no idea what to think. I wasn’t sure if I should feel reassured by my three negative COVID-19 tests (I was still waiting on the PCR results) and I was wary about not wearing a mask around my son. I knew tests can return false negatives and I knew that COVID-19 symptoms can continue to appear and worsen over time, so all I could do was continue to monitor how I felt.

According to [a Johns Hopkins] study, published in the Annals of Internal Medicine, there was a 67% chance of patients receiving a false-negative if they were tested within four days of contracting the virus.

While I waited to see if I would experience new or worse symptoms, I began to do more research about the accuracy of COVID-19 testing. Viral and antigen tests commonly used in hospital emergency departments detect active infection, whereas antibody tests are used to detect previous exposure or infection. However, if viral and antigen tests have weak sensitivity or are administered too soon, patients may receive false-negative results.

This concern was described by the Mayo Clinic Proceedings in June. Internal and Emergency Medicine published a case report of a 30-year-old man in China who had seven negative PCR tests before testing positive on day eight of his illness. Researchers from Johns Hopkins determined that testing for COVID-19 too early in the course of infection increases the possibility of a false-negative result. According to their study, published in the Annals of Internal Medicine, there was a 67% chance of patients receiving a false-negative if they were tested within four days of contracting the virus. The study found that when the test was administered on the day of symptom onset, typically four days after becoming infected, the probability of receiving a false-negative dropped to 38%. Researchers noted that testing was more accurate when administered three to four days after symptom onset, but even then, the probability of receiving a false-negative was 20%. The New England Journal of Medicine further described issues with COVID-19 testing and false negatives, ultimately concluding that “clinicians should not trust unexpected negative results (i.e., assume a negative result is a ‘false negative’ in a person with typical symptoms and known exposure).”

An argument could be made that in some situations, testing might be unnecessary and even dangerous because it could provide false reassurance, would not change how the disease was managed in that individual and could use up limited testing supplies. So it’s reasonable to wonder if everyone who feels they need a COVID-19 test should get tested. And if the answer is no on a micro level, couldn’t it be argued that it’s still valuable to do the testing to aid public health monitoring on a macro level?

While it’s true that widespread testing can help determine where the disease is most prevalent and how to react, this strategy is most useful when robust contact tracing and educational procedures are also put in place. Unfortunately, these programs are currently severely lacking in the United States. If widespread testing is available without proper tracing and education, patients with negative results, especially those with mild symptoms, may mistakenly assume they do not have the disease and therefore cannot transmit it and may not continue recommended isolation procedures when these are needed most.

Due to the dangers of false-negative results and considering limited testing supplies, I tell patients who had known exposures to COVID-19 and are now experiencing mild symptoms that they most likely have the disease and that they need to isolate themselves without seeking further testing. I indicate that I would hate to offer a test that returns a false-negative, which in turn provides a false reassurance of safety. I empathize with their frustrations and explain that testing is more accurate when significant symptoms develop. And although the waiting game is extremely difficult and anxiety-producing for most people, social distancing, isolation and careful self-monitoring is the best advice at that time.

For me, after another 48 hours of worsening cough, worsening body aches, and uncomfortable diarrhea, I was pretty sure I had COVID-19, but my viral PCR test was also negative. Another two days passed and then my son developed a fever. To obtain testing again for both of us, I decided to visit urgent care, instead of the hospital where I work, on the off chance that an error was occurring at my facility. This test was also negative. However, my son’s test was positive. Because I had been his sole caretaker in recent days, I was fairly convinced that he most likely contracted COVID-19 from me, even though I had never tested positive.

My family and I are well now, and thankfully, none of us suffered severely while sick. My son had a fever for only one night. My husband and I are back at work. In late July, we all tested positive for long-term COVID-19 antibodies, which officially confirmed that I did have COVID-19, even though a total of five viral and antigen tests had come back negative.

As we continue to learn more about this disease ― and how to best test, track and fight it ― hopefully we will see fewer and fewer false-negative results. But until we have more sensitive and accurate ways to detect this virus, we must listen to our bodies and medical experts. If you’ve been exposed to COVID-19 and you develop mild symptoms, you should stay home and adhere to appropriate isolation protocols. If you develop significant symptoms, please seek medical care. And if you want and are able to get tested, go for it. But just remember that a negative result doesn’t necessarily mean that you aren’t infected ― or that you can’t transmit it to those around you.

Dr. Christine Zink is an emergency physician and freelance medical writer who lives in San Antonio. She attended medical school at Weill Cornell Medical College and completed her residency at New York-Presbyterian Hospital in 2010. She now combines clinical emergency medicine with freelance writing. View her writing work at www.chrissys.ink.

Do you have a compelling personal story you’d like to see published on HuffPost? Find out what we’re looking for here and send us a pitch!